About being late and early…

No, this article won’t teach you any excuses when you’re late (again). That sure would be an entertaining subject. For now we’ll just discuss some expressions about time.

There are people who are always late. They are tardy.

Their weakness is tardiness.

And there are people who are mostly on time. They are punctual.

Their strength is their punctuality.

When you’re exactly on time, you’re on the dot or at 9 o’clock sharp.

For instance, when I write this sentence, it is 9:30 on the dot.

Instead of on the dot, some people say on the button. The meaning is the same.

You can also say: right on time, or punctually (from the word punctual, above). 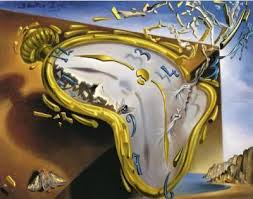 You can say: I’m running late.

Or: I’m going to be running late for the meeting.

It doesn’t necessarily mean that you’re running. You can also be driving or sitting in a bus. It’s just an expression.

You can also say that someone is unpunctual when they’re late.

If someone does something late, you can say that they do it belated. For example send a belated birthday greeting.

Or you could use the adverb of tardy which is tardily: The children dressed tardily as their father was waiting to bring them to school. 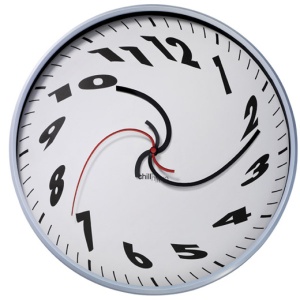 You can also use words like behindhand and behind time.

Farah is terribly behindhand in paying her bills.

Sorry, I’m running behind time because I’ve had a busy morning, but I’ll get your report ready in half an hour.

And the last word that you could use is overdue:

Marcello, that electric bill is overdue. You really need to pay it now if you don’t want to be cut off.

You can be fashionably late.

This is when you arrive at a party 20 minutes later than it says on the invitation. If you arrive there exactly at the correct time, nobody will be there. For weddings, you can easily be half an hour late.

I can be late for my own wedding, can’t I?

Another occasion where you can be fashionably late is for dates. Some ladies, and some men too, like to keep their date waiting for a few minutes (not too long!) so as to seem less interested. This can work well if you believe in playing hard to catch. However, it will irritate punctual types.

Now you can do a quiz about Erica, the tardy manager.

Match the sentences with their meaning. Which sentence says more or less the same thing?

1 Erica is our manager. She’s nice but famous for her tardiness.

A She’s always on time.

B She’s not always on time.

2 This Monday we set a meeting for 3:30. She called to say she would be behind time.

A She would be tardy.

B She would be punctual.

A Erica was right on time.

B The talk with her co-worker had made her unpunctual.

4 Erica started the meeting by saying that not enough employees were in the office at 9 on the button.

A Employees came in exactly at nine.

B Some employees were tardy.

5 But worse, they also handed in their projects too late.

A Employees were often behindhand with their projects.

B Employees were not precise enough about their projects.

6 From now on, she would set an example and do something about her own tardiness.

A Erica intended to be fashionably late from now on.

B Erica intended to work on being more punctual from now on.

7 Our next meeting was on Wednesday at 9:30 sharp. But Erica wasn’t there.

A Something bad had happened to Erica.

B Probably, Erica would be late again.

A Erica was right on time!

B Erica was perhaps fashionably late.