Also listen to this reading of the poem by actor Richard Burton.

Probably you understand most of this poem. There might be only a few words that need clearing up, which we’ll do in a moment.

What’s the poem about?

The speaker talks about a woman with much longing. Either the woman has gone away or she has died. We know that she is missing, because the speaker says that in the first line: “Woman much missed.” We don’t know why she is missing, although there are some hints that she changed a lot. See line 3: “You had changed from the one who was all to me.” The speaker may even have fallen out of love with the woman.

The speaker thinks he hears the woman’s voice. To make sure it is her, he asks her to show herself as she used to be when they first met, and she was wearing her air-blue dress (line 8). But she doesn’t come, and he thinks he has made a mistake: it’s not her voice he is hearing, but only the breeze (line 9). He is alone in an autumn landscape, but he is still hearing her voice.

Explanation of words, line by line

Call does not mean telephone call, but call someone’s name. The woman is calling the speaker’s name or is speaking other things in a loud voice that grabs his attention.

Line 2: Saying that now you are not as you were

She is not the same as in the past.

Line 3: When you had changed from the one who was all to me,

Line 4: But as at first, when our day was fair.

At first means in the beginning. Fair means beautiful.

Line 6: Standing as when I drew near to the town

Line 7: Where you would wait for me: yes, as I knew you then,

Line 8: Even to the original air-blue gown!

Original means the first one. Air-blue: the colour of the sky. Gown = long dress.

Even to means exactly the same as.

Line 9: Or is it only the breeze, in its listlessness

A breeze is a soft wind.

Listless means without energy or enthusiasm.

Line 10: Travelling across the wet mead to me here,

A mead is a meadow, a field of grassland for cattle to graze on (eat the grass.)

It’s wet because it has just rained.

Line 11: You being ever dissolved to wan wistlessness,

Wistless is a new word invented by Hardy; it should mean the opposite of wistful which means longing. It’s ambiguous whether the poet means that the woman is not longing anymore, or the speaker doesn’t miss her anymore. (It could mean both.) That last interpretation doesn’t fit, because the speaker said at the beginning that he misses the woman a lot. So what does he want?

Line 12: Heard no more again far or near?

If the woman in the poem is dead, then it’s only natural that the speaker, or anyone else, will not hear from her again or see her again. If the speaker still hears from her or sees her, it means she haunts him, like a ghost. 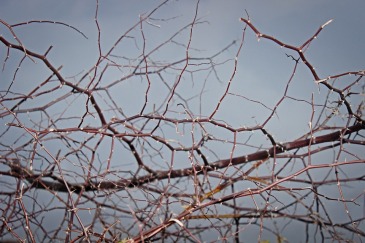 Falter means to stumble, to hesitate.

Line 14: Leaves around me falling,

You could also see this as a symbolic image that the speaker is growing old too.

Line 15: Wind oozing thin through the thorn from norward

Ooze means to trickle through (to go through something slowly).

A thorn is a plant with prickles (see picture).

And norward means northward, in northerly direction (to the north). The wind comes from the north, so that is a cold wind.

Line 16: And the woman calling.

The woman is still heard above the wind.

There is some abab rhyme in the poem, but it’s very informal. See for example the rhymes in lines 1 and 3 with the word “me.” And in lines 5 and 7, which both end in “then.” That sounds very relaxed, doesn’t it? Lines 2 and 4 have a kind of half-rhyme in were and fair. These shoddy rhymes help to make the poem sound conversational, yet they also keep a certain ceremony, as if the poet decided to keep it together and not break down in private mourning and complaining.

You could also notice that the poem with its 16 lines is not a sonnet. The verse form of the sonnet, which counts 14 lines, is so often used for love poems. It seems that Hardy sought to avoid its grand and formal tradition, and instead looked for something more simple and more rural. The result sounds more like a short peasant ballad.

Another thing that you could notice about the poem’s technique is that is imitates natural sounds and movements. First of all there are a bunch of words that imitate the thin wind that is blowing about the speaker in the last part: listless, wistless, thin, through and thorn.

The poet also makes clever use of repetition (“call to me, call to me,” “The woman calling”), to make clear that the voice of the woman is stuck inside the speaker’s mind. When I listen to this poem a few times, the whole thing gets stuck inside my head, actually.

And finally, the phrases in the last stanza get shorter and more fragmented to illustrate that the poet is stumbling and stopping:

None of the lines in the final stanza make a complete sentence. Thus I is not a sentence. Faltering forward is not a sentence. Leaves around me falling is not a sentence, etc. All this reinforces the idea that the speaker is a broken man. He’s saying that the woman was changed from the one who was all to him, but he, too, is a fragmented, sadder version of himself.

Does it help you to understand this poem if you know that the poet’s wife, Emma Gifford, died in 1912, years before Hardy died himself (in 1928), but he soon married afterwards, with a 40-years-younger woman? The ending of the poem cannot be happy if we assume this poem is about the poet’s first wife. Whenever he thought about her, he felt guilty that he had found happiness again. This might give another meaning to the difficult ending, where the speaker is stumbling forward in an environment without warmth or cheer.

The Story of the Poem

There is a little story in this poem, and it’s not a happy one.

In the first stanzas there is hope. The speaker is glad to hear the woman’s voice and be reminded of her again. He hopes to see the happy vision of the woman when he first got to know her. She would wait for their meeting then in the town. (If you take this to be an autobiographical poem about Hardy and Emma, his first wife, this would have taken place in Cornwall, the region in England where Emma was from. Hardy was from Dorset.)

The second half of the poem seems without hope. The speaker is stumbling forward, and the scene around him is wet, cold and cheerless: the leaves are falling, and the wind is noisily present all the time. We don’t know where the speaker is going. He still hears the voice of the woman, which may be a good thing or a bad thing. But is he going forward away from the voice, or is he going forward to the voice? After all, it wouldn’t be so strange that the speaker would come to love the memory of the woman more now that she is gone. Even if he didn’t love her anymore when they were still together, perhaps now he is growing closer to her again. At the same time, it may not be so pleasant to be followed by the voice wherever he goes.

In short, this poem is full of ironies and the poet’s emotions about the love for the woman are complex. He remembers beautiful memories of their life together, yet he is racked with guilt about losing her. And now the question is: How to continue, when the past will never come back again?