Improve your speaking, without a teacher!

Sometimes you hear people talk about practising your English with the Speech Shadowing Technique. What is that and how can you use it to improve your English on your own?

Shadowing technique or speech shadowing means talking at the same time or just after you hear a native speaker talk.

Basically, what you do is take an audio file of an English speaker and try to say the same things as her/him.

Does this sound easy to you? No, it’s not! Because you also need to be a very good listener.

Anyway, why will this improve your English speaking (and listening)? Because you will be forced to imitate the speech patterns the speaker is producing. Speech patterns in non-native speakers are often different from the ones native speakers use, and that is very often the cause that the two groups of speakers don’t understand each other.

What kind of speech patterns should you look for?

Tip: Use a video that has a transcript (in English of course) or subtitles. You can read along while you talk and this makes it easier for you to remember what to say. Besides, it’s also good for your reading and spelling.

Okay, now that you’ve read about the advantages of speech shadowing and you’ve read some tips, here is some instruction how to get you started:

It depends what you want to learn, but I recommend having a look at these resources:

TED Talks. Lots of different speakers, lots of fascinating subjects. All the videos have English transcript and subtitles.

The 6 Minute English series made by the BBC.

Here is a collection of ESL videos with transcripts from the Voice of America. 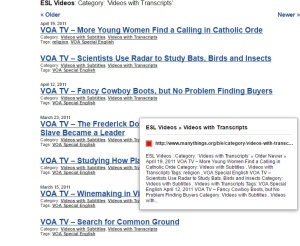 Tip: Make sure that the video is just a little easier than you can handle. You will have more fun when you understand all the words or almost all the words than when you don’t know what you’re saying.

Here are some links to easy Podcasts with transcripts:

Elementary Podcasts by the British Council (also available in iTunes).

Easy conversations and Simplified Speech Episodes especially for beginners from Culips. (Also available in mobile format for your phone.) 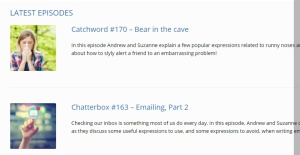 Dialogues and conversations about all kinds of subjects made by two linguists who speak slowly and clearly.

2 Put on the audio file and start speaking along with the speaker.

This is where you do the real shadowing.

Speech shadowing is better with headphones.

Use the tips above to increase your awareness of speech patterns, in order to be able to imitate them better.

It didn’t go so well? Don’t worry, you will get better. Just put it back on from the beginning, or wait for tomorrow and try again.

Or try a different video.

If you love singing, and more importantly, if your neighbours love your singing, you can also do shadowing with songs.

How does it work?

Same same. Sing along with the singer and try to imitate the accent and pronunciation.

Here is a list of songs with lyrics, in case you don’t have your own preferences.

Some songs might have some mistakes in the lyrics (including wrong words and spelling mistakes, just so you know. These videos are made by amateurs.)

Special Things to Try with Shadowing

There are some other things you can do with shadowing.

Especially when the regular speaking tempo of the speaker is going too fast for you and you feel you are missing out on things, try the following:

Pause the audio after one sentence or after one phrase. Then try to say what you’ve just heard. Play it back as many times as you like to check your pronunciation again. Also check for intonation and pauses (see above).

If there is a word you have difficulty with, isolate the word and say it a few times. Didn’t get it? Try again tomorrow, or divide the word into syllables and say each syllable, then speed up. Check a different speaker for this word, by looking it up in an online dictionary (The Free Dictionary has human voices saying the word in British and American accent).

Suppose you want to have an English r. Choose a video/podcast with a speaker whose r you like. Pause at words that have an r in them. Repeat the word or say the word together with the speaker.

You can use this technique with all kinds of pronunciation features you’d like to work on: Th, vowel sounds (e, a, ea, the o in door or the o in no, etc.), sh as opposed to s, distinguishing between b and v, or v and w. If you don’t know what your weaknesses are, ask an English speaker to listen to you speak. They will tell you after one minute. With the speech shadowing technique, you can continue working on your “problem” on your own.

Do not use text-to-speech apps for your shadowing.

Have fun! Don’t forget to speak to some real people now and then.