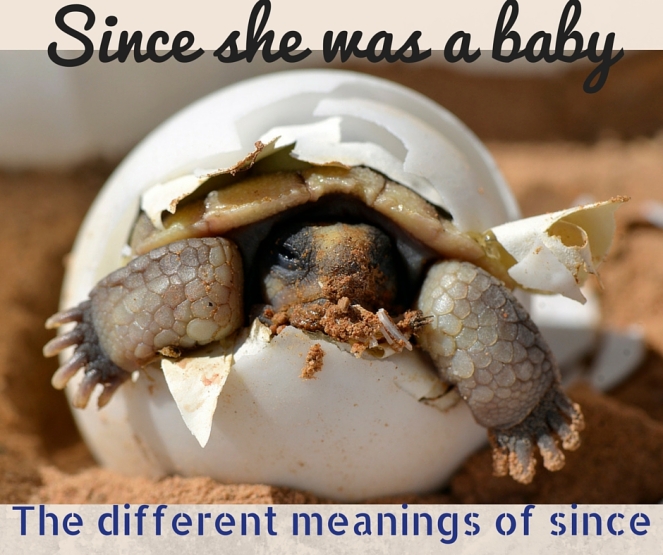 There are several ways to use the word since and this can be confusing. So it’s time we spoke about the different meanings of since.

1) The First meaning of Since: Starting from a Time

You will probably know the meaning of since that means from a certain time in the past.

I’ve known Jasmin since she was a baby.

Robbie has been studying English since 2014.

Lidia and Bjorn have been dating since January.

Ms Holden hasn’t gone done to the cellar since she saw a mouse there.

Farrell hasn’t read a book since the age of 18.

Because this meaning of since expresses that something started in the past and is still valid today, you will find since often used with the present perfect tense. For more information about this tense, follow the link.

Hwoever have a look at this sentence again:

I’ve known Jasmin since she was a baby.

Can you see this?

Since she was a baby = in past simple.

To make things easier and avoid having to deal with tenses, I have a simple idea for you. Use a verb with –ing.

He saves tons of money since switching to a cute little car.

Didn’t you say you were feeling much better since eating only vegetarian food?

2) The second meaning of since: Because

Since can also mean for the reason that, so the meaning is the same as because.

It is more formal than because.

Since you were the one who dropped the key in the sewer, you need to pay for a new key.

The two parties broke off the negotiations, since there was no progress.

Do you want to stop for a little something to eat, since you said you were hungry?

She is called Lizzie? Hm, that can’t be her real name, since the last time I met her she introduced herself as Margaret.

Can it sometimes be confusing to use since, since it can have two meanings?

Good question. Yes, it can.

Maret laughed since her cousin told her a joke.

Well, of Maret was laughing from the time her cousin told the joke, that means Maret is still laughing now. That doesn’t make sense, although it would be possible. So I need to understand that since means for the reason that.

It would make the sentence even more confusing when I fiddle with the tenses in this sentence.

Suppose I say: Maret was laughing since her cousin told her a joke.

Now I can understand that she was laughing for a longer time, so from the time that her cousin told the joke. But it’s still not very likely. The since in this sentence means because.

What about this one?

Maret has been laughing since her cousin told her a joke.

Note that the tenses are now the same as in the standard sentence for since meaning from the time that. I’ve used present perfect. So now I really do mean since as from the time that her cousin told her a joke. The meaning is odd, but there we are.

Want to hear another one that could be quite ambiguous (= open to different meanings)?

I missed you since you were gone.

Since could both mean from the time this person left, or because the person left.

There are also some expressions with since that you might like to know. All these expressions use since in the meaning of from the time that.

This is slang and means for as long as I can remember or forever.

For instance you ask how long Sue and Tom have been married. – Oh, since forever, must be almost 60 years now.

I like your watch. Is it new? – No, I’ve had this watch since forever. You just didn’t notice it.

Since Then / Since That Time

Suppose you’ve just told your friend about something that happened at a certain time and you want to tell what happened after that. You don’t need to say the time again, but you can just say since then or since that time.

I had lunch with Adrian at Food Place last month and haven’t seen him since then.

(You don’t need to say again that it was last month when you saw Adrian for the last time.)

Sofia delivered two healthy twins three years ago; she hasn’t gone back to work since that time.

Ever Since / Many Times Since

With ever since you can do the same as with since then: refer to a certain time again and say when it was the last time that something happened. When you say ever since, you’re implying it was for a long time.

They met at the barbecue and have been together ever since. (And they’re going to be together for the rest of their lives, or that’s how it looks.)

We met in high school and have been friends ever since.

I’ve bought handmade soap at Soaps for Us when I was looking for a present and I’ve been back there many times since.

Many times since also means for a long time, but with breaks.

The Difference Between Since Then and Ever Since

When do you use since then and when ever since?

Ever since is used for things that you are still doing or that are still continuing.

So you can’t say: I haven’t seen him ever since, because seeing someone is not a long action that you can keep doing.

But it is okay to say: They have been together since then.

Since on Its Own

Is it okay to use since on its own, at the end of the sentence?

Let’s have a look at an example and then we’ll decide whether this is possible or not:

I had lunch with Adrian at Food Place last month and haven’t seen him since.

What do you think? Okay or not okay?

Em. I had to look this one up in a grammar book (I checked more than one grammar book). I still don’t know the answer, as no one talks about this problem. I know that people say since at the end of the sentence, so that seems to be accepted English. But I wanted to know what grammarians think about it.

As soon as I find out, I will let you know.

Now you can do a quiz.

You can do this quiz online here.

Decide in which meaning since is used in the following sentences.

1 That toast can’t be ready yet, since you haven’t plugged in the toaster.

2 The Transport Minister has had a stomach operation, and he’s been on a diet since then.

3 Since we still have a long journey home, we’d better start going on our way now.

4 They’ve had to give away their cat and haven’t been allergic ever since.

5 I don’t need to cook when Donnie and Tina come here, since they took me to a restaurant when I stayed at their place.

6 The children have been hooked to piano lessons since they first started taking them in the autumn of 2012.

7 What’s the score since that disastrous opening set?

8 Since I was in town anyway, I thought I would pay you a visit.

9 The first restaurants established themselves in the block around 2000, and since then the whole area has been developing into an entertainment district.

10 Since global warming is measured per country, and not per capita, China and India seem to be the worst polluters in the world.

More about since here.

One thought on “The Different Meanings of Since”