Contraction means shortening. It also means the muscle contractions that a pregnant woman feels before she gives birth.

Or it can mean muscle contractions (shortening), like when you’re exercising.

I think you can already know that we’re not going to talk about pregnancy or bodybuilding. I’m not sorry about that.

This is about the shortening of I have to I’ve and I will to I’ll and stuff like that.

You need to know this to learn about tenses in English (verbs in different times).

You can’t learn the tenses by just listening to people, unfortunately. Maybe children can learn this way, but assuming you’re an adult, it’s more effective and faster for you to learn some rules. Why is this? Well, the problem is that English people don’t say you have but you’ve. They don’t say I am, but I’m. They don’t say I will but I’ll. And they don’t say: I would, but I’d.

This means you need to know the grammar but also which contractions are used. Contractions is the name for the short form.

In my experience, I know from teaching students that if they don’t know the tenses, they won’t hear that I’m saying ‘ll or ‘d. And they won’t be using those contractions themselves. Unless you do know these, however, you will not be able to speak correct English and make yourself understood by English-speaking people.

Here are the main ones you should know:

*Please note that it’s for it has and it is sound exactly the same!

**Please note that I’d can mean I had or I would (and the same with the other pronouns). You will know from the sentence which of the two is meant.

You should ask your English teacher how to say the contractions. Or use Google Translate or your Text-to-Speech app to check the pronunciation.

What to Do with Names and Contractions?

Now suppose you’re not using a pronoun such as she, he, you, etc., but you’re using a name. Can you then use a contraction?

It depends on the name.

If the name goes well with the contraction, you can use it. For example: I want to say Henry has just come home. I can use a contraction, because I can say: Henry’s.

But if I want to say Henry will, I won’t be able to easily say: Henry’ll. So don’t use a contraction here. Henry will come home soon.

In general, it’s easier to stick an s from has or is at the end of a name. With will it’s more difficult. The same with the d from had or would (also more tricky).

Let’s see whether we can stick an s, d, or ll at the end of these names:

Do you use contractions with names? If you have any questions about this, please write in the comments.

Contractions with Other Words (Nouns)

The same problems can come up with other words that you’d like to contract, usually nouns.

For example, I want to say that my coffee has gone cold.

Can I contract this? Certainly.

I want to say my book is finished.

So I’ll say: My book’s finished.

Now you can also see why beginning learners of English might find this difficult. They think that I’m saying: My books finished. But that doesn’t make sense with the grammar.

Should You Write Contractions or In Full?

There used to be a rule once that when you write, you need to write I will and you can’t write I’ll. This is not true anymore. You can write contractions, even in business emails, official letters and legal contracts.

Why Do Some People Say or Write Not instead of Using the Contractions?

When people say or write the word “not” in full, it can mean that they want to stress the negative. For example, you want to say that I can’t eat this cake, because it’s a present for a friend’s party. So you can say: “Please do not eat this cake.” This is stronger than saying: “Don’t eat this cake.”

When Do We Say Do/Does and Have etc. in Full in Some Answers?

When you answer a question, you can often say I have, he is or I do etc. for a short answer.

You can’t make those answers any shorter by using a contraction.

1 Have you seen Electra?

2 Has Kay been round this morning?

Maybe you’ve been able to see the rule for yourself.

Rule: You can’t shorten the auxiliary verb when there is no main verb.

To find out about auxiliary and main verbs, have a look here.

Now you can do a quiz. 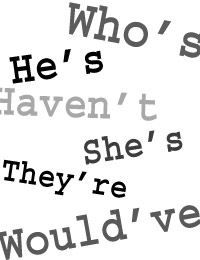 Decide where you can use contractions in the following sentences. There can be one contraction, two, three or none at all.

1 People have said I worry too much.

2 I know this has always been one of my big problems.

3 When I lend a book to someone, I worry when they will bring it back.

5 When they say they will bring it back next week, I am afraid they are pulling my leg.

6 The only thing I do not worry about is whether the borrowers will damage my book.

7 I trust that my friends will not do funny things to my book.

8 You will probably say that I should not lend books to anyone.

9 But do I want to keep my books to myself only?

10 Nowadays I buy many digital books. That will take care of my little problem.