Did you know that one of the most revered* poets in the English language died when he was only 25? And this was way before the time when famous singers and rockers became immortal (= live forever) when they died of drug overdoses.

*See Word to the Wise

The poet I’m talking about is John Keats (1795–1821). He had the bad luck to contract tuberculosis, which at that time was often fatal. His mother and uncle died of the same nasty disease. This was after his father died as the result of a horse riding accident.

John Keats, a lively boy who loved fighting but was well loved by his friends, became an orphan (= without parents) at the age of 14.

His grandma took in the future poet, who read voraciously and won one essay contest after another at school. However she lost a great part of her money to a crook.

After he finished school, Keats studied as a surgeon. At the time, this profession was a safe bet; a surgeon was a kind of doctor who didn’t need to finish a degree, as he was in charge of dressing wounds, setting bones and other straightforward (= uncomplicated) procedures.

Bored with the medical profession, Keats read Edmund Spenser’s The Faerie Queene, which opened his eyes to the world of fairy tale and splendid verse. Soon he was writing poetry.

The main theme in his poetry is the relation between the “beautiful” world of art, and suffering, of which Keats knew a thing or two, as you can understand from the above short biography.

I have to add here that art in the time wherein Keats lived had as its object to render true and beautiful representations of life. Not human suffering or emotions were its subject.

This only changed with the Romantic Period, to which Keats can be counted. In our own, post-modern times, we can only see plenty of suffering and subjective feelings in paintings, poems and books, but when Keats lived this was something new.

The underneath poem, the Ode on a Grecian Urn from 1819 is one of Keats’ most famous poems. It is an amazing poem both for some beautiful language, vivid (= lively) images and its intellectual depth (= it’s deep). 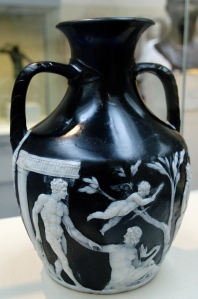 An urn is a sort of vase. See picture. It can be used to hold flowers, or be placed in a garden. But most likely you will know this word as a container that holds ashes of a dead person after he has been cremated (= burnt).

Whilst you’re reading Keats’ poem, have a think what kind of use Keats has in mind for the urn. The urns that were made in classical times, by the Greeks and Romans, had decorations on them of figures dancing, playing sports, fighting, and even having sex. The figures on the urns could be humans or gods.

This is a classical kind of poem that was originally meant to be sung. The ancient Greeks used to sing their odes.

The ode can have various (= different) structures: it can be long or short, the stanzas can be regular or irregular. The subject of an ode is something that is loved; and something serious that invites thought.

Odes aren’t usually comical, although of course if a poet wants to make fun of odes there are plenty of examples of it. This is one of them: To a Mouse by Robert Burns. Or try this hilarious Ode to the Alarm Clock.

Okay, ready to talk about each line?

The Poem Line for Line

On a Grecian Urn means to or about a Greek urn. The urn is addressed (= talked to). Talking to a thing is a thing that poets do in odes. (You will see that In this ode, the poet also addresses the things he sees on the urn.)

So what have we been reading so far?

This stanza develops the thought from stanza 2 that nothing can change in the world of the picture on the urn. It gives some more examples of that.

Then it stresses the idea that as little as human passion is not a part of the scene on the urn, neither is human suffering “all breathing human passion far above.” Passion and suffering go together, is the idea here, and art is clean of that. Or at least the conventional art in Keats’ time was.

As I’ve remarked above, before we started reading the poem, today we have plenty of paintings and poems full with suffering. But probably that wasn’t what Keats was looking for in his own art. He was looking for a way to say something meaningful about how art could talk about life and how art can help us tolerate suffering.

Hope you enjoyed reading this!

This article is an insightful review of Keats’ work and life.