By Tray Sanford and Jacqueline Schaalje

Read this article about green and black tea and then answer the questions (underneath). You can do the quiz online.

If you’re looking for ways to improve your health, you may have heard about both black tea and green tea. You may not like either of them. But did you know that in the UK, the land of drinking tea ever since someone discovered that hot drinks are easy to make and keep you warm in winter, tea is still more popular than coffee?

In the UK, as in many other countries, black tea is the traditional brew. But green tea is getting more and more popular, supposedly because of green tea’s health benefits. But is this true? Is green tea healthier than black tea? Do green and black tea come from the same plant or different plants? Where is tea with milk drunk? Read this guide and find out.

But first some tea words.

So first you heat the water or you boil it.

You boil water in a kettle. This can be a kettle on a fire or the gas, or an electric kettle.

When the water is boiling, you’ll see steam rising from the kettle.

Then you take a tea bag or loose tea leaves and put them into the pot.

You can stir the tea, although that’s not necessary.

Then the tea needs to brew for a few minutes. This allows time for the compounds in the tea to give off their flavors when they react with the hot water.

Next, you pour the tea in a glass, a cup or a mug. What is the suitable vessel to drink tea from depends on tradition and culture. For instance, in the UK, tea is usually drunk in a cup or a stone mug. But Arabs drink tea from little glasses (also coffee, by the way). The newest thing to drink your tea in is a double-walled cup. Here is one from Amazon: hot inside, cool outside.

From Russia comes a metal cup holder with a handle, called a podstakannik (nice Scrabble word) in which a glass is placed. The holders can be very pretty. Of course rich people would have silver ones. Here is one:

You can also serve the tea in a cup and saucer (= a little plate underneath the cup). This is the traditional way of serving tea in the UK. In Turkey people use a saucer too, but underneath a curvy glass.

In order to prevent tea leaves from coming into your cup, you can use a strainer. 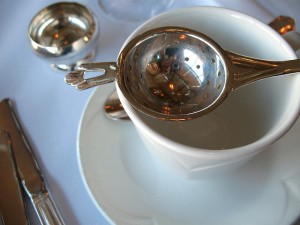 Then, for a British style cuppa, add milk. Or, you can pour milk into the cup first, and then add the tea. Which is better? I don’t know. But there are lots of discussions about the merits (= advantages) of either, for instance in an essay by George Orwell, “A Nice Cup of Tea.” He writes: “… one should pour tea into the cup first. This is one of the most controversial points of all; indeed in every family in Britain there are probably two schools of thought on the subject. The milk-first school can bring forward some fairly strong arguments, but I maintain that my own argument is unanswerable. This is that, by putting the tea in first and stirring as one pours, one can exactly regulate the amount of milk whereas one is liable to put in too much milk if one does it the other way round. ” Here is a link to the full article.

Orwell was against adding sugar in your tea. This also seems a cultural thing, with Russians and Arabs famously adding sugar liberally (= a lot).

Where Does Tea Come from?

What confuses many people is that black and green tea come from the same plant, Camellia sinensis. The differences can be found within the way the leaves are processed and oxidized. Tea grows on bushes, mainly in China and India, but number one world producer today is Sri Lanka. Tea’s origin in the East explains why tea is only drunk in the West from the middle of the 17th Century, which is when the first East India companies sent by seafaring nations such as Holland, England and Portugal brought back this interesting little plant. The first tea in Europe was drunk by rich people. What did people in Europe drink before they drank tea and coffee, you may ask. Well, beer and wine of course. The water wasn’t clean enough to drink. Tea was also found to cure colds. The first tea that was drunk in the West was black tea. But in China traditional tea means green tea.

Most tea is harvested manually even today, which as you may imagine is not a fun job. But these two ladies seem to like it. Or perhaps they are simply happy that it’s the end of the day:

In fact, there seems to be an easier method to pick the leaves. And why not? Just use a big chopping knife. What the people in the picture are using is a semi-automatic tea harvesting machine. There’s also an automatic harvesting machine on the market, which can be operated by one person. 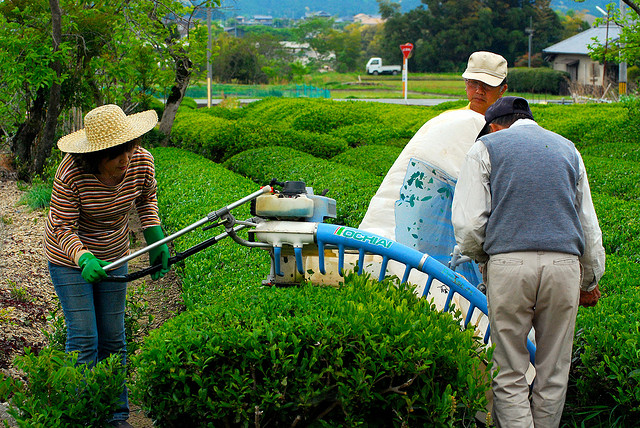 A Girl with Tea

With its strong roots in Chinese and Japanese history and tradition, green tea generally is seen as most favorable, as it is commonly attributed to aiding with weight loss and reducing blood pressure. With that being said, many herbal remedies contain green tea to help boost the metabolism of the user.

In order to prepare green tea, the leaves are first harvested and then they are withered (= they dry out). After this has occurred, the leaves are then heated by one of two methods: steaming or pan-firing. Steaming is generally the preparation method of choice for Japanese consumers whereas pan-firing is more popular amongst the Chinese. The main purpose of this process is to stop oxidization so that the leaves do not go brown. Instead, the leaves stay green. This is also the best way to ensure that the tea has the most delicate and freshest flavor possible.

A professional tip when preparing green tea is: don’t boil the water too long. The flavours in green tea are more delicate than those in black tea, and they are more pronounced (= taste better) when the water is less hot.

Black tea is commonly known for its benefits pertaining to caffeine. In fact, many people find that black tea gives them a more natural source of caffeine than coffee, which also may explain why tea hasn’t been replaced by coffee just yet. It’s also important to remember that black tea has been consumed in a variety of cultures for thousands of years. Coffee, on the other hand, is still relatively new in some cultures, for instance in Asia where many people until recently never consumed coffee at all.

During the preparation process for black tea the leaves are harvested and withered, much like green tea. The leaves then go through a tearing process in which they are curled; this is used to speed up the oxidization process. Contrary to green tea, black tea first needs to be oxidized before it is dried and this process helps to darken the tea and give it a deeper flavor and aroma.

Contrary to what you may think, both black and green tea are healthy. Another surprising piece of information is that both contain about the same amount of caffeine. So if you thought that green tea contains no caffeine, that’s not true. But they both generally contain much less caffeine than a cup of coffee (about a third to a half of the amount in coffee). What may have given green tea its additional good name is that it is the variant of tea that is used in Chinese medicine. As we’ve seen, the Chinese drink green tea, so it seems only natural that they used green tea for medicinal purposes too. What else is drinking tea good for? It is claimed to protect you from certain types of cancer, heart disease and lung disease. It could reduce the risk of stroke, Alzheimer’s and Parkinson’s diseases. It can also help with weight loss, and prevent cholesterol. So keep drinking your cuppa!

In case you’d like to read more about the fascinating subject of tea, check out this article that answers the question why you can’t brew tea in the microwave.

This gallery showing tea time traditions in England has some pretty pictures.

Now do the Quiz!

You can do this quiz online and check your answers here.

A Grow on the same tree.

B Grow on the same shrub.

2 What does brewing tea mean?

A Boil the water.

B Boil the water and put in the tea leaves to give off its flavors.

3 What causes the flavours of tea?

B The minerals in the leaves.

C The oxygen in the water.

4 What do you use to boil the water for tea?

5 In which countries do people drink tea in a glass?

A Russia, Arab countries and China.

B Russia, Arab countries and the UK.

A You could discuss this forever and never find the right answer.

B Most people do what George Orwell advises, add tea first.

7 What is the difference between black and green tea?

A The leaves look different.

B The leaves of black tea are oxidized (they turn black), whereas with green tea a process is used to stop oxidization.

8 How is tea harvested?

A The tea leaves are picked manually or by a machine.

B The tea plants are cut.

C No water is given to the tea plants until they start to wither.

9 Why do many people believe that green tea is healthier than black tea?

A It really is healthier than black tea.

B It probably stemmed (= came) from the fact that green tea is used in Chinese medicine.

C It can help protect against cancer.

10 How come people in the West drink tea?

A They can only drink it with lots of sugar.

B The Chinese brought tea plants to Europe.

C European explorers saw people drinking tea in Asia and they thought it was a good idea to introduce it in the West.

5 thoughts on “Is Green Tea Better for You than Black Tea?”