A reader asked me to write some TOEFL practice. TOEFL is an English exam that many American universities require students from abroad to pass.

The following article is suitable for intermediate and expert level students.

One of the requirements of the TOEFL test is to know how to compare and to contrast.

Comparing is looking at two things (or more) and noticing the similarities between them (= notice how they are the same).

Contrasting is looking at two things (or more) and noticing what the differences are between them.

Texts can also be a mix of comparing and contrasting.

The first mini-article you’ll read is about food. Tip: if you find any words in these articles that you don’t know, don’t be lazy. Look them up in your Google translate, Babylon or old-fashioned dictionary.

Eating in the Past

In the past, people didn’t always eat what we eat today. Unlike diners weaned on a typically western diet, our ancestors would hunt ants, small mice and gather birds’ eggs, roots and tubers. Once the hunter-gathers settled down, they consumed livestock such as pigs, goats and sheep. They also planted wheat, barley and millet, and ground and baked them into bread. Thousands of years ago, bread already became a staple food. Another difference with now is that food could take on a symbolic meaning. For instance lettuce was believed by the ancient Egyptians to bring hope, associated with the beginning of spring. They also believed fish improved their fertility. Today, symbolic foods are most usually reserved for holiday meals. Another big difference is that food in the past wasn’t always flavoured in the way that we do. The Phoenicians were probably the first people who salted their foods.

Question: Is this text comparing or contrasting?

We can put the comparisons and contrasts in a table, like this:

Read the following and notice the similarities and differences.

Bike lanes aren’t seen in every country. There are still plenty of countries where cars and bicycles share the same road, which is a predictable cause of cyclists being “mowed down” by vehicles. Other countries do have bike lanes — the ones in Copenhagen even have railings for when you want to hold your balance or push off your feet. But so many cyclists use them, that they get congested and people have to use their elbows to push through. Some tourists are so scared by the aggressive cyclists that they’d rather take a tram or bus. In another bicycle-friendly city such as Amsterdam, you also need to keep your eyes open as a pedestrian, because cyclists can run into you in unexpected places. In some cities such as Munich, New York and Tel Aviv, there are beautiful, but inconvenient bike lanes that are placed right next to a sidewalk. Unfortunately some people with short-term memory deficit aren’t always clear on which space is reserved for which kind of transport. Again, this can be a case of dithering, with possible dangerous repercussions.

Question: What kind of text is this? Does this text compare or contrast?

Let’s fill in the table:

You may have noticed that there are some words that can give you a clue about whether a (part of a) sentence compares or contrasts with what was said before or after.

These words are signal words.

Here are some signal words for comparisons:

In the same way

Here are some signal words for contrasts:

On the other hand

It doesn’t mean, however, that if you find no signal word in a sentence that it can’t be a comparison or a contrast. Sometimes, you need to use your intelligence and understand from the context.

Some TOEFL exams will ask you to fill in these tables. And it’s very good practice! So here is a text for you to practise with. Fill in the table. Answers are at the bottom of this newsletter.

Next time we’ll do some more texts, okay? 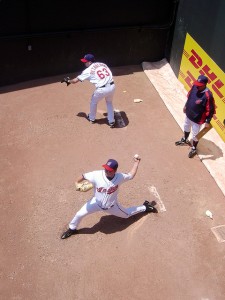 One in about nine people are left-handed. In the past, left-handedness was believed to be from the devil, so for instance at school, left-handed pupils were forced to use the other hand. Several myths still circulate about lefties: that they’re more creative, die at a younger age and that being left-handed is a Darwinian survival strategy. However, left handers are just as creative as right-handed people. Whereas it can seem at first sight as if there are an awful lot of left-handed famous guitarists, such as Jimi Hendrix, Kurt Cobain and Paul McCartney, one should mention the other 90 right-handed artists who are just as capable. Left-handed people don’t die earlier than right-handed people; however, more left handers suffer from autism, schizophrenia and dyslexia. It isn’t true either that left-handedness is a survival skill. It was thought until recently that having a south paw would have a surprise effect in battle, and this would lead to relatively high numbers of left handers in the population. However, a new study in Papua-New Guinea, where conflicts were until recently still resolved through physical fights, only 3.6 percent of the population is left-handed, much less than the average. It’s true, though, that left handedness is hereditary. Two right-handed parents have a 10 percent chance of giving birth to a left-handed child, whereas with two left handers this chance will rise to 26 percent.

Now you fill in the table:

Answers underneath (scroll down)