The London Underground is an underground train system covering 11 lines. The longest line is the Central Line, which measures 34.1 miles, which is … eh, let me see… 55 kilometres. This line is also the most travelled. All the lines of the Tube, as the underground is nicknamed, carries more than a billion passengers per year.

The busiest hours are the rush hour in the morning. The quietest hours are from 1 am to 5 am, when there are no trains running. Not even on the weekend!

The London underground is the oldest in the world. The oldest tracks date from the year 1863. These old stretches are now part of the Northern Line.

Large parts of the underground are actually above-ground, especially outside the city centre. The longest tunnel is 17.3 miles (28 km) from East Finchley to Morden (via Bank). Most tunnels lie a few decametres under the surface; the deepest station is Hampstead on the Northern Line, which is buried at 58.5 metres.

Fun Fact: All the station names contain letters from the word mackerel (a sea fish), except St John’s Wood.

Even though temperatures underground normally go down, this law of nature does not seem to work in the Tube stations. They can get very hot. Making your way through the endless stairs and tunnels and waiting on the platform you easily get much sweatier than at street level. The highest temperatures were measured during the 2006 heat wave, when the Tube heated up to 47 degrees Celsius. It was discovered that such extreme temperatures break the European animal welfare laws! Although cooling units have now been installed, there is still no air conditioning in the trains.

The Tube logo has a name: the roundel. It consists of a red circle with a blue horizontal beam.

Want to know which is better: a tunnelled and blackened rollercoaster or riding the Tube under the City? The last, of course. Because the tracks follow the Medieval city streets, there are some curves and bends which can fly you off your bench. Fun but not when you’re still eating your breakfast.

Now we’ll learn some Tube words, and then your job is to put them into the right spots in the quiz. 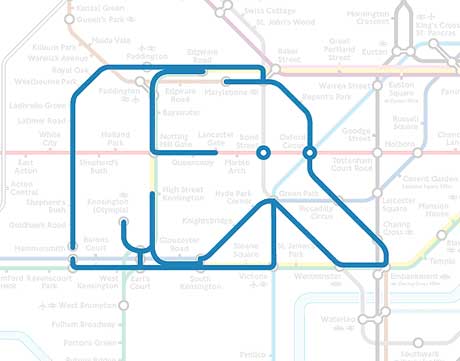 Commuter – a person who travels to work

Platform – the street next to the train where passengers stand waiting

Destination – the place where the train is going to

Pit – large hole in the ground

Car – one train unit. Trains usually consist of more than one car.

You can do this quiz online and check your answers immediately.

Choose the right word from above.

3 The ___________ under the track is pretty deep and in some cases prevents jumpers killing themselves by leaping in front of the train.

5 Today you wouldn’t believe your eyes if Sting appeared in your ____________ and started singing for money. Yet, this is apparently what he did before he became famous.

7 During World War II nightly air raids, hundreds of thousands of Londoners slept on the cold ____________ of the tunnels. Nevertheless, stations were sometimes hit by bombs.

Want to do more Vocabulary Quizzes and read about interesting stuff?

Remedies for when You’re Sick

2 thoughts on “Let’s Go Tubing! – Bits and Pieces about the London Underground, Plus Quiz to test your vocabulary about metros”