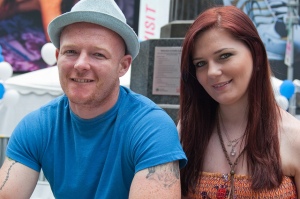 Last time we discussed British accents. Now I’d like to tell you a few more interesting bits about American and Irish accents. Yes, these two have some things in common! Continue reading to find out why. Understanding how these accents work can help you understand what goes into performing them. If you work on your accent, it’s not impossible to sound like a native speaker.

What is an American Accent?
Sometimes called a “Hollywood accent,” an American accent is different from an English accent. Although the words and grammar in English spoken in Britain and English spoken in America are nearly identical, the accents define the two as separate. Within an American accent, there are actually several different varying accents. There is a “southern accent” which is commonly found within Southern states such as Georgia and Alabama, and there are “New York” accents which link to such states as New York and New Jersey. There is also a midland American dialect and corresponding accent (from the middle of the country). In all there are about 15 distinct dialects, each with their own accents. Generally speaking, all Americans have some sort of accent, and you could say that general American accent does not exist. What really separates accents is sometimes difficult to grasp, as an accent may sound peculiar to somebody not from that area, but within the area people may pledge they don’t “have an accent.” There is also a problem with some vowels, as people who are used to saying vowels in a certain way may have trouble hearing the difference with vowels said in a different way. That’s also the reason why vowels can be very hard to teach to speakers of other languages (because non-natives have a different way of “hearing” vowels).

How to Get an American Accent
When you can understand the basics of English, the basics being enough for casual conversation, you can start working on your accent. You could be the best English speaker in the world, but if you don’t have an accent that reflects America, you will stick out. Same as Americans who speak Spanish may stick out in Spain, non-native speakers have a hard time separating themselves from their primary language. Unfortunately, foreigners stick right out in American culture, them often being the brunt of many jokes dealing with inability to speak English. Make sure you have most of the English language down, and the next step is to carefully look how words are formed by Americans. Don’t just listen, also watch how they form the sounds with their lips and teeth. This can help you to produce those same sounds yourself. If you find the process tedious and you fear you will never get it right, don’t worry. It takes time before you will be fluent as well as correct with English, so don’t quit right at the sight of difficulty.

What are the most distinctive features of American English?
Say an English r at the end and in the middle of words such as door, more, beer, further, and darling. Also work on your th (stick your tongue between your front teeth). And try to get the vowel sounds right.

What is an Irish Accent?
Irish accents are found in people who are from Ireland. People usually think all Irish people sound the same, but actually Ireland is split up into different pronunciations of certain words, same as America. Some Irish people don’t pronounce the “r” sound, similar to British English, while others do include the r sound, linking it to American English. There are also some vowels in Irish English that may sound the same as in American English, such as the o in bother, dog and caught, which sounds more like an a.

Connections between American and Irish Accents
America has roots in Ireland, as millions of Irish settlers settled in the Northern part of America from the 17th century onwards. Their descendants form a big part (nearly 12%) of the total American population today. Depending on what kind of Irish accent a person has, some people can find it hard to differentiate between Irish speakers and Americans. However, others say they think that Irish and Americans actually sound quite different, and they may have problems communicating to each other. It all depends what kind of American or Irish accent you have.

Want to learn more?
Here are two videos I recommend you to watch:
A compilation of British, Irish and American accents as spoken by native speakers. It’s just a pity that the origin of the American accents isn’t explained.
A linguistics professor who is specialized in American accents explains which accents are prestigious and which sound as if the speaker is less intelligent or ignorant. Also he talks about changing vowel sounds in American English; a change that is happening right now. Fascinating stuff!