There are lots and lots of famous English poets that have used animals for inspiration. There are also lots and lots of animals that have served as inspiration, from the chicken to the lion, and more. Here, we will take a look at only three of the many famous English poets that often used animals and animal imagery in their poems. We will give you a short biography of each, as well as examples of just a few of their animal poems. Feel free to follow the links to the works. Explore these poets on your own to learn even more.

Rudyard Kipling was an English poet who had a deep respect for animals. He is probably most famous for writing The Jungle Book, a story of Mowgli, a young boy who grows up in the jungle and learns from the animals. Who doesn’t know the famous animation movie? Kipling wrote many poems that also dealt with animals. He wrote about cuckoo birds, flies, bees, foxes, big cats, snakes, and more. Examples of his animal poetry include Song of Seventy Horses, The Truce of the Bear, and Cuckoo Song. You can find lots of his poems online.

T. S. Eliot was born in Missouri, but also held citizenship in Britain. He wrote a whole book of poetry about cats called Old Possum’s Book of Practical Cats. This book has even been adapted into a musical play called Cats. Many regard Eliot as the first truly modern poet. He was greatly influenced by Kipling. Eliot also wrote various essays and plays during his lifetime. The most famous of his works are not really about animals, however. He is probably most noted for The Love Song of J. Alfred Prufrock and also The Wasteland. 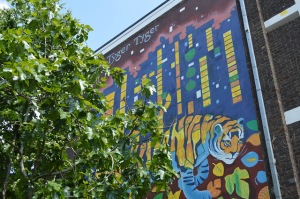 Blake was a very artistic man who called England his home in the 1800s. He wrote, painted, and even made prints. One of his most famous poems, The Tyger, concentrates on a tiger. He also wrote The Little Lamb, about an innocent little lamb. His poem To See a World in a Grain of Sand speaks out against animal cruelty. Blake’s works were influenced by his Christian religion. Because he is known as a Romantic poet, Blake’s poems are sometimes very vague. They warrant a few readings, at least, before interpretation. Many of Blake’s paintings also feature animals, both real and fictional. He painted tigers, fleas, dragons, mythical beasts, and much more.